Dr Florin Tibu is a Postdoctoral Research Fellow in the Bucharest Early Intervention Project Lab in Bucharest, Romania and discusses about a paper he and his colleagues have recently published in Psychological Medicine.

Could you provide a short description of the study?

We are conducting the first ever randomized controlled trial (RCT) of foster care as an intervention for children who, as infants, grew up in orphanages. The study started in 2000 and we’re currently assessing the children at age 16 years. The paper we published in 2016 in Psychological Medicine focused on the mediating role of executive functions (EF, which are higher-order sets of cognitive processes like working memory, planning and response inhibition) in the link between exposure to early institutionalization and symptoms of attention-deficit/hyperactivity disorder (ADHD) at age 8 years.

What would be the most important take-home messages from your study?

How are these findings important in understanding the development of children raised in institutions?

Parents who want to adopt or foster need to be aware that life in institutions, particularly during infancy and early childhood, will likely take its toll in terms of cognitive abilities of the young children. The prefrontal cortex (PFC), a region in the brain that is heavily responsible for the development of executive functions, seems to be very sensitive to psychosocial deprivation from very early in life, possibly before 6 months. Deficits in executing functions can, in turn, be responsible for the later occurrence of ADHD problems, which can be very taxing for the child and family. The sooner the children are removed from institutions, the better their health and psychological outcomes will be. Our study has shown that, although beneficial in many areas of development, for example attachment and internalizing psychopathology, the foster care intervention had limited or no effects in terms of executing functions and other brain functions, as well as in externalizing problems like ADHD and conduct problems.

What future studies would you recommend to increase our knowledge regarding executive functions and ADHD in children exposed to early deprivation?

It would be interesting to study effects of foster care placement in children younger than 6 months to figure out how early would such an intervention prove beneficial in preventing executive functions deficits and ADHD problems. Also, it would help to assess executive functions from a much younger age, for example since toddlerhood and examine it longitudinally. Last but not least, it would be important to replicate our findings in other populations of children raised in institutions from other countries.

Florin Tibu, Ph.D.  is a Research Psychologist who graduated in 2001 with a B.S. in Psychology from the University of Iasi, Romania. After one year of working with the National Institute for Sports Research in Bucharest, he moved to the UK and completed a postgraduate program in Applied Psychology at Liverpool Hope University. He then worked as a Research Assistant in the BEIP until 2007, when he returned to the UK to pursue a Ph.D. in Developmental Psychopathology at the University of Manchester. Florin rejoined the BEIP lab team in 2011 as a Research Fellow and has since been involved with collecting and analyzing the data at ages 12 and 16 years. His general research interest is in early influences on infant and child development, with emphases on behavioral and cognitive development, physiology, and mental health. 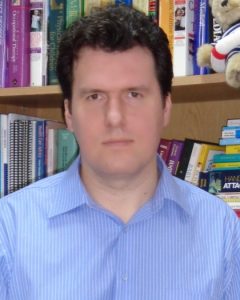