Hans Saint-Eloi Cadely, Ph.D. an Assistant Professor in the Department of Human Development and Family Studies at the University of Rhode Island discusses an article below that he recently published along with his colleagues in the Journal of Interpersonal Violence. 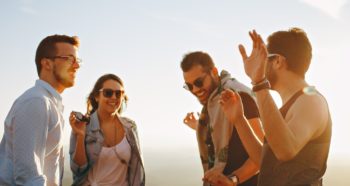 Could you describe the aim of the study?

First, we need to understand what intimate partner violence (IPV) consist of. IPV can best be described as psychological (e.g., insulting or threatening to hurt one’s partner), physical, (e.g., grabbing or hitting one’s partner), and/or sexual forms of aggression (e.g., unwanted sexual contact) directed towards one’s romantic partner (Straus, Hamby, Boney-McCoy, & Sugarman, 1996). Previously, among a sample of late adolescents transitioning to young adulthood, we found that such that such behaviors may be expressed in different ways across time.

Specifically, two increasing patterns (i.e., two patterns in which reports of perpetrating IPV increased over time) in addition to a low stable pattern (i.e., a pattern in which participants reported little-to-no perpetration of IPV) were found for psychological IPV, whereas a high stable pattern (i.e., a pattern in which participants reported consistent use of IPV) and a low stable pattern were shown for physical IPV. These findings allowed us to conclude that change in IPV should not be thought of as one average pattern across a population, but rather that such behaviors can change and/or remain stable in multiple ways across a population (Saint-Eloi Cadely et al., 2017).

Therefore, we decided to build on these findings by examining whether these patterns could be predicted by theoretical variables that are influential to the prevalence of dating aggression and IPV among adolescents and young adults. Specifically, we examined whether membership in our identified patterns can be predicted by having witnessed violence in the home (interparental aggression), negative interpretations of social situations (social-information processing), negative perceptions of romantic relationships (relationship insecurities), and change in romantic partners over time (discontinuity in relationship partner).

What would be the most important take-home message from the study?

In summary, most of our theoretical variables predicted membership in at least one of the increasing patterns for psychological IPV, and in the high stable pattern for physical IPV. Specifically, an increase in reports of perpetrating psychological IPV over time was predicted by more negative interpretations of social situations, more relationship insecurities, and less change in romantic partners over time. Furthermore, with the exception of discontinuity in a relationship partner, these variables along with having witnessed violence in the home predicted persistence in the usage of physical IPV (i.e., membership in the high stable pattern).

Multiple implications for interventions and therapists addressing IPV among youths can be taken from this study. For instance, based on our findings, interventions should address misconceptions and anxieties youths may hold about romantic relationships. Our findings also suggest that cognitive therapies may be necessary to help perpetrators’ respond more effectively to the behavior of others. It may also be helpful for therapists and interventions to help youths unlearn negative behaviors adopted from parents or other legal guardians. Lastly, couples therapy may be helpful to desist the perpetration of IPV among individuals who remain with the same romantic partner.

What other studies can be recommended to further an understanding in this line of research?

Link to the primary paper:

Link to the paper that the primary paper builds from:

Hans Saint-Eloi Cadely, Ph.D. is an Assistant Professor in the Department of Human Development and Family Studies at the University of Rhode Island. His research focuses on the effects of dating aggression and intimate partner violence on adolescent and young adult development.